Several genera of ferns have developed a relationship with ants similar to that seen in the Rubiaceous ant-plants.  The ferns provide a living space for the ants in swollen rhizomes or tubers and some of the ferns also provide food for the ants.  The ants in return leave waste within the plant that decays and provides nutrients for the plants.

Lecanopteris is a genus of 13 or 14 species of epiphytic ferns growing in tropical and tropical montane habitats on the islands of Southeast Asia.  The most recent classification I have seen has them in the Order Polypodiales and the Family Drynariceae. 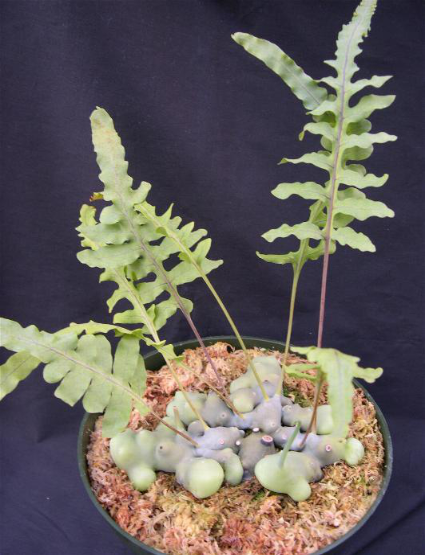 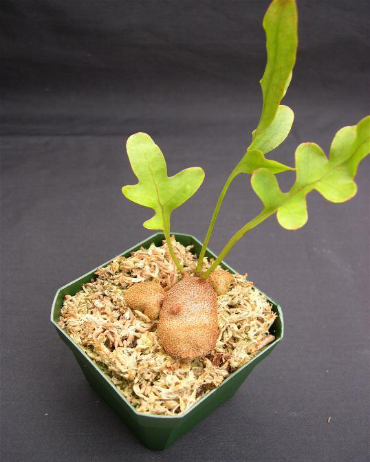 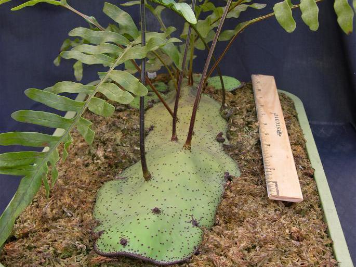 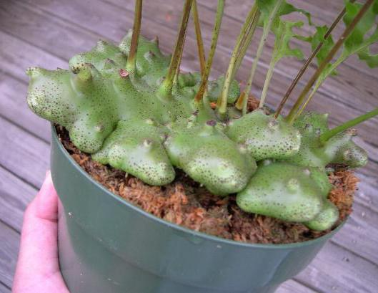 As with the Rubiaceous ant-plants various species of ants and Lecanopteris ant-ferns share a mutualistic advantage.  The ants get a dry, dark place to live inside the enlarged rhizomes. The plants get nutrients from decaying ant wastes in some of the chambers and some protection from herbivores.

“Although it is rare to find Lecanopteris plants with ant-free domatia, the relationship between Lecanopteris and the ants is facultative rather than obligatory. Each partner can survive without the other, though possibly survival and vigor of the plants may be affected in the absence of ants. Although the ants are not dependent on the rhizomes for nesting, they will take advantage of them whenever they are available”1

Lecanopteris rhizome chambers are simpler than those in the Rubiaceous ant-plants. Nutrients still get absorbed by the plant but there are no warts in the chambers to facilitate absorption. 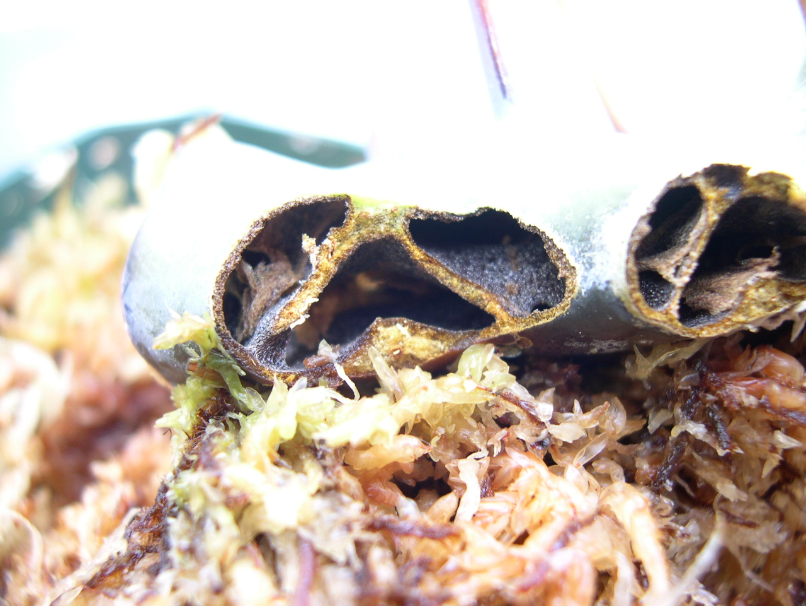 Fig. 5 This is a photograph of a cross-section cut through the rhizomes of a mature plant of Lecanopteris curtisii showing the chambers that the ants inhabit. Notice the dark lining of the chambers. Old sections of rhizome also turn black. Ants require darkness to breed and raise their young.

In habitat, Lecanopteris are often seen growing in association with other epiphytes, in particular Dischidias and Rubiaceous ant-plants. 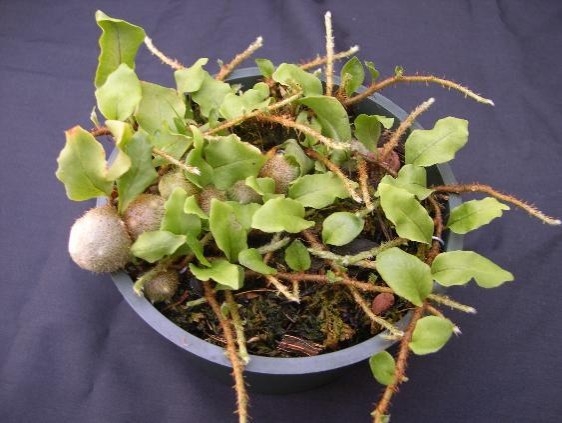 In Central and South America the genus Solanopteris had 5 species of ferns that produce ant-tubers on their rhizomes for ants.  (I say “had” because those 5 Solanopteris have recently been reclassified into the genus Microgramma that contains other species that do not make the ant- tubers.)

Solanopteris have a reputation for being hard to grow.  I find them easy and share my growing system with you here:

Solanopteris have a reputation of being difficult to grow.  I now find them easy to grow and they reward me with ample numbers of ant tubers.  Here are the things that I think have made me successful.

First off, Solanopteris need a complex epiphyte mix to grow in.  I did ok when growing them in 100% long fiber sphagnum but once I made the mix more complex my results improved.  My current mix is about 40% long fiber sphagnum, and 15% each of coconut husk chunks1, orchid bark, small pieces of tree fern (1/4 to ½ inch cubes that I cut on a band saw, along with some of the “smalls” left on the band saw table) and the reddish, small round clay balls that the hydroponics growers use.

Don’t try to propagate by dividing up a root ball.  The resulting plants die or do poorly.  Don’t try to make traditional cuttings – it does not work.  Instead air layer.  Put a pot with fresh growing media next to a growing pot that has the rhizomes growing out over the edge of the pot.  Use paper clips that have been cut in half to pin down the growing tips onto the fresh media in the new pot.  Once those rhizomes root and are growing out over the edge of the new pot cut the rhizomes off at the rim of the original pot.

I recommend air layering a new plant as soon as possible after you get a new Solanopteris because you never know, sometimes these plants die or go into a funk for no know reason.

You need to keep the growing media moist using high quality water.  RO water is my first choice; distilled water is a second choice.  I fertilize with half strength fertilizer only once or twice when new growth is just beginning and again when ant tubers start to form.

Now for cultural conditions.  Solanopteris like humidity, heat and moving air.  I stumbled onto this on my own and have recently seen it reiterated on page 15 of this document from the American Fern Society:

I grow my Solanopteris in an orchidarium – basically a 65 gallon aquarium with sliding front glass panels for easy access.  I keep one of the glass panels open about ½ inch at all times.  Inside the orchidarium is a small room humidifier that is adjustable and I have it set at a low setting – so low you can just barely see the stream of fog coming out of it when it is on.  Behind the humidifier, blowing right into the fog stream is a bun fan that blows the humidity right over the Solanopteris plants on a shelf.  Computer stores sell these bun fans for cooling desktop computers.  The humidifier and fan are on a timer and run for 12 hours a day.  The lights, T5, are on for 15 hours a day outside the orchidarium and heat the interior into the lower 80s during the day.  The orchidarium is in my basement so night-time temperatures drop into the low 60s.

The Solanopteris are about 8 inch below the top glass of the orchidarium.  I get good ant tuber formation when the plants are close to the lights.  If I move them to a lower shelf I get fewer or no tubers.  Very good light is essential to forming ant tubers.

1 Coconut husk chunks need to have salt removed from them before use.  Soak them overnight in a bucket of water.

Discard the water the next day and repeat for 2 or 3 more days.  You may want to give the orchid bark the same

treatment.  I have found bags of this to sometimes have high salt content as well.