Hydnophytum formicarum from Singapore .  This species has a great caudex - chocolate brown color, mostly smooth but with some low ridges  My material of this species can be traced back to seeds off a plant on a fallen branch in the Central Water Catchment in Singapore.  This photo is a seed-grown 9 year old plant in a 6 inch pot. 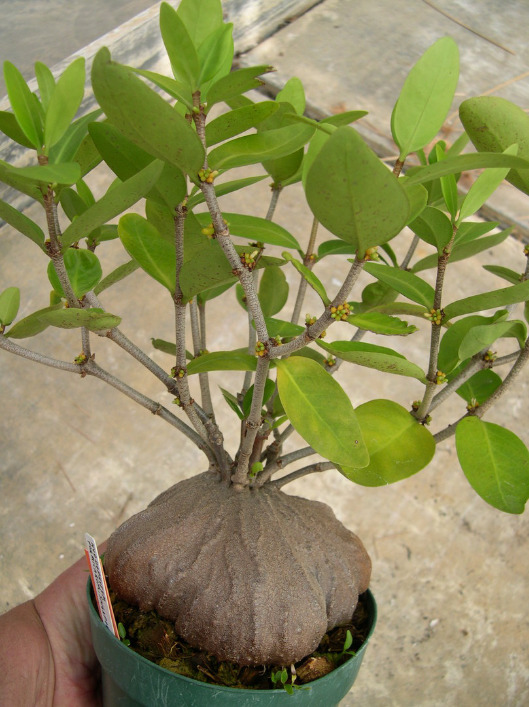 Hyndophytum simplex from the Island of Aru.  Hydnophytum simplex is very different from the other Hydnophytums in cultivation.  The caudex is more rounded and symmetrical, the leaves are larger and there are ridges running down the stems from the bases of the leaves.   The plants also have a great green color on the caudex and whole plant for their first two or three years.  The caudex later turns golden and then a mix of brown/tan/gold.  My material can be traced back to a plant growing at the Leiden Botanical Garden in the Netherlands.

The left photo is a plant of Hydnophytum simplex growing in the Y crotch of a tree at the Matthaei Botanical Garden in Ann Arbor, Michigan, USA..   The caudex is about 6 inches in diameter.  The second photo is a young plant in a 3 inch pot. 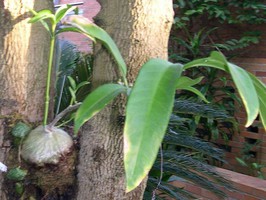 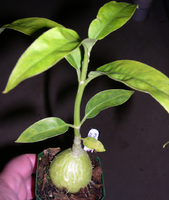 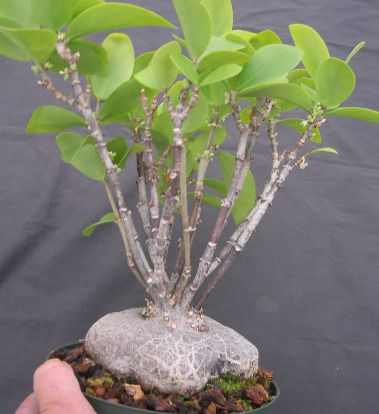 Hydnophytum puffii.  This plant was named in March of 2016 in this article:   http://www.ingentaconnect.com/contentone/botbel/plecevo/2016/00000149/00000001/art00013   It was previously in circulation worldwide as "Hydnophytum species Needle Leaf" and by the unpublished name of Hydnophytum perangustum.  Unusual leaves.  Good to grow if you are short on growing space because it stays compact and the caudex stays small.  It grows as an epiphyte on swamp trees on Borneo.   My material can be traced back to accession # 95007 at the Leiden Botanical Garden in the Netherlands.  According to a note published on Facebook in January 2016 by D. Rowe “It was collected by Art Vogel then curator at the Leiden Botanical Garden, Netherlands, from a heath forest near Nabawan in December 1995. Nabawan is a small town in central Sabah south of Kota Kinabalu on Borneo Island.”  Photographed here is a 14 year old seed grown plant in a 4 inch pot. 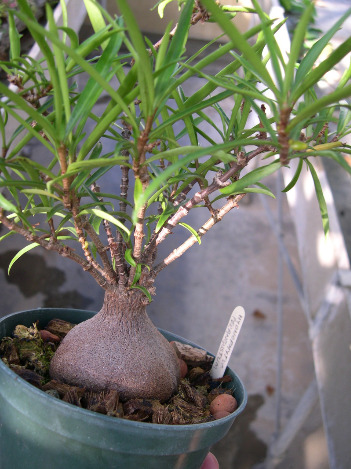 Hydnophytum formicarum ‘the Horne form’.  Hydnophytum formicarum is a widespread and variable species. There are many forms of Hydnophytum formicarum being grown in the USA and around the world. This is the largest form, called the Horne form, for the man, Jerry Horne, who introduced it into cultivation in the US from Thailand in the 1980s. I have personally seen a plant with the caudex almost 2 feet across in cultivation and heard first-hand reports of 3 foot diameter caudexes in habitat. My material can be traced back to several of the original plants that Jerry imported that now reside at the Atlanta Botanical Garden.  In this photo are two of those original plants at the ABG - the 16 inch basket on the left edge of the photo and the 12 inch basket on the right.

Hydnophytum formicarum, small form.  This is a good choice for terrarium culture because it says small.  The caudex gets to about 3 or 4 inches in diameter and the branches stop at 12 to 15 inches tall.  I grow two seemingly identical clones - one from Europe and the other from California State University at Fullerton.  The CSUF plant was noted as having been collected in New Guinea.  Pictured here is my 12 year old seed-grown plant in a 5 inch pot 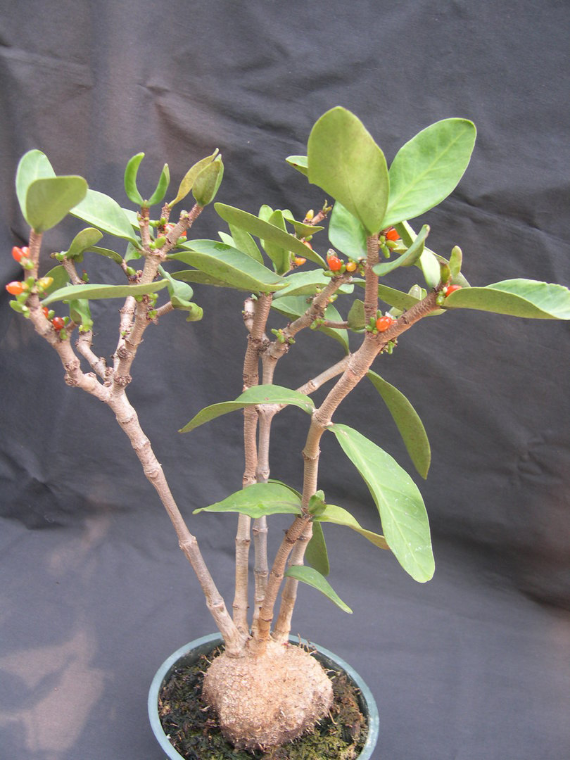 Hydnophytum formicarum, multistem form.  This is a medium sized plant - my biggest is about 20 inches tall.  It puts out many stems at the top of the caudex, perhaps 15 to 20.  Mine are not old enough to have that many stems yet.  These are two copyright protected photos by Michel Monnier of France from whom I got my material 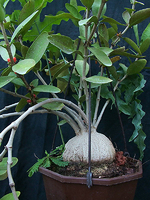 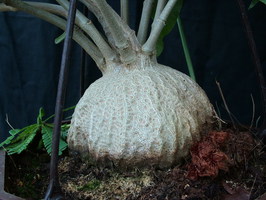 Hydnophytum formicarum, a minature form from Quezon Province on the Island of Luzon in the Philippines.  (On some websites this plant is called Hydnophytum formicarum "Pumpkin")  This is a slow growing small-sized plant - my biggest is over 10 years old and is only about 7 inches tall.  It will start to flower and set fruit while still less than 2 inches tall.  This came into cultivation in 2006 from Merlin Sy at Pinoy Plants. 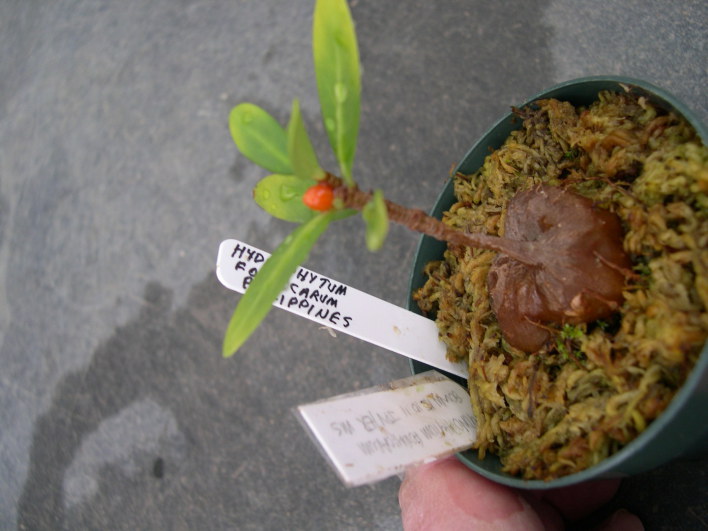 Hydnophytum formicarum, from Duke University.  This is a medium sized plant - my biggest is about 20 inches tall.  It is similar to the small form of H. formicarum except it gets slightly bigger.  It has the same dark color on the stems and caudex and the same rough texture on the caudex. I have no further provenance for this plant 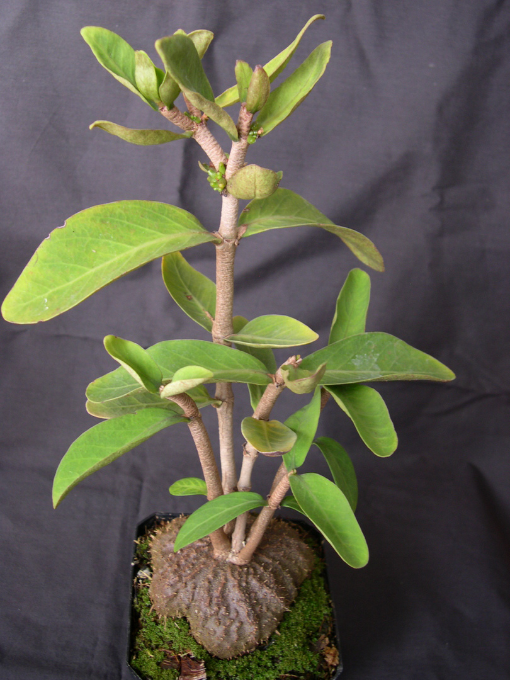 Hydnophytum moseleyanum.  Hydnophytum moseleyanum is a widespread and variable species.  Many names have been given to look-alike species like: Hydnophytum crassifolium, loranthifolium, papuanum, longistylum and philippinense. Trying to separate them all is futile.  The taxonomic rumor mill has it that most of these will be lumped into H. moseleyanum when that genus finally gets revised.  Many of these moseleyanum type plants have caudexes that are pear-shaped or close to spherical.  And all have succulent leaves.

Hydnophytum moseleyanums and H. formicarums are often confused.  The easiest way to tell them apart is by the veins in the leaves - formicarums have 6 to 12 pairs of small veins coming off the midrib, moseleyanums only 3 or 4 pairs.

Three plants of H. moseleyanum showing the variability in caudex color and shape. 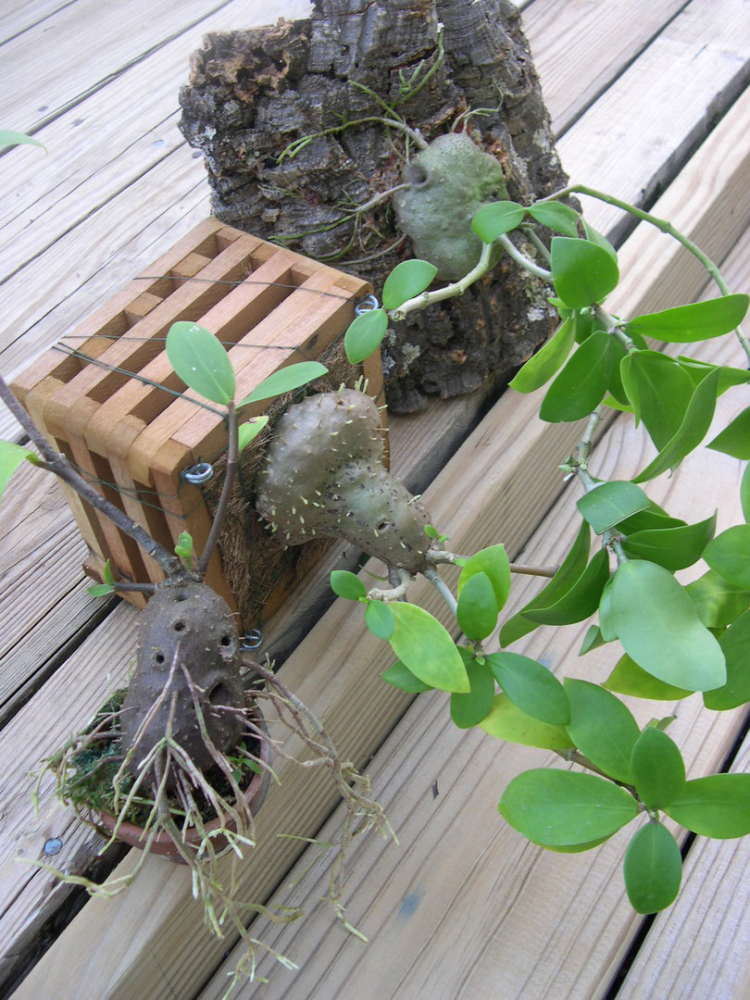 Hydnophytum papuanum.  This is one of the H. moseleyanum type plants that may stay a separate species when the genus Hydnophytum gets revised.  It is different from the mass of moseleyanum-type plants by its smaller, rounder leaves that often have rolled edges.  The caudex also tends to have a very rough texture to its surface.   It is a medium sized plant - my biggest is about 20 inches tall. 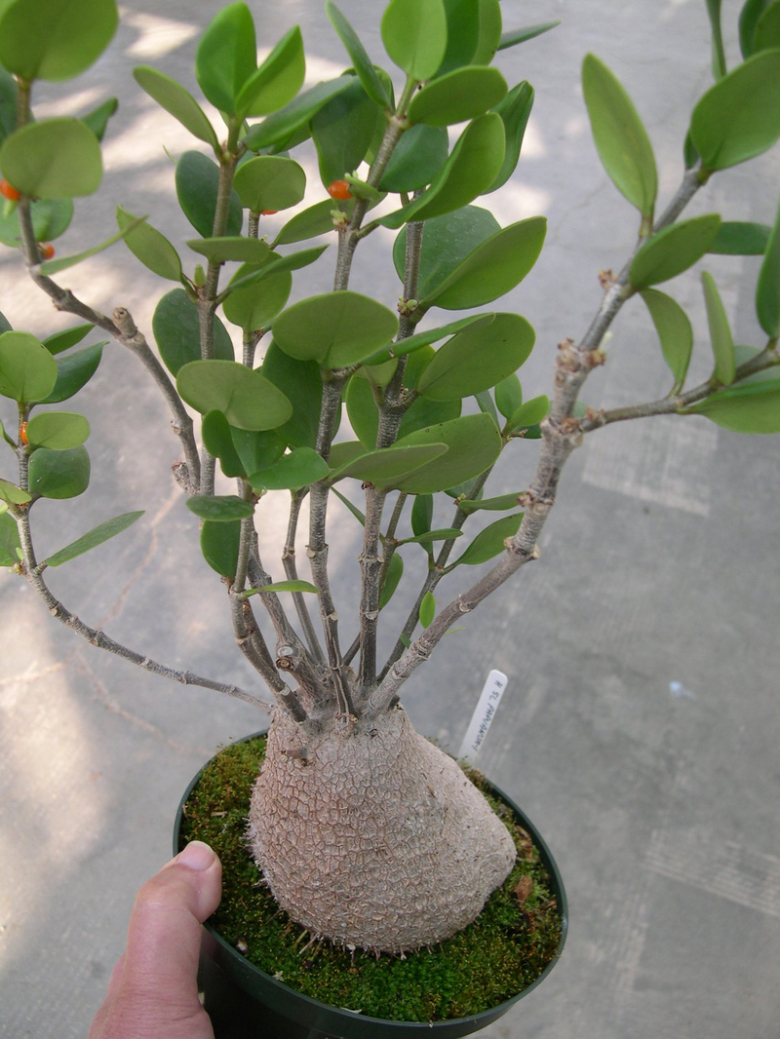