THE NAMING OF MYRMECODIA TUBEROSA ‘VARIANTS’

Over 80 species of Myrmecodia have been described by scientists since the first one in 1823.  When Drs. Camilla Huxley and Matthew Jebb revised the genus in 1993 they lumped what had been 22 of those separately described species into one species - Myrmecodia tuberosa.   This made M. tuberosa a widespread, highly variable species.   One of the lumped species was Myrmecodia armata.

Myrmecodia tuberosa 'armata'  My material can be traced back to a large plant growing at the Atlanta Botanical Garden as their accession number ABG 1990-1053.   Atlanta Botanical Garden records show that their material was received from Dr. Whitten at the University of Florida on October 10, 1988.  The records further indicate that the collector was named Madison and that he collected the original material in1976 in Malaya.

Myrmecodia tuberosa ‘armata’ is a widespread variant being found in Vietnam, Peninsular Malaysia, Singapore, Sumatra, Borneo and Java.   There is considerable variation in the plants from different areas including in the number and nature of the spines on the caudex and stem.  Many plants have fewer spines than the name “armata” would suggest.

This is a photo of a mature plant grown from a seed planted in 2007. It is growing in an 8 inch basket mounted on its side so that the plant will be in a more natural position like it would hang on the side of a tree in habitat. 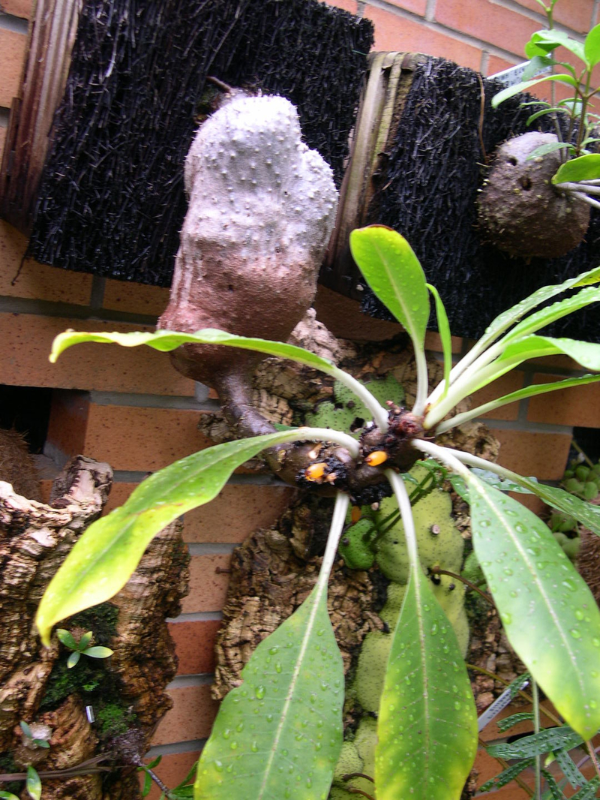 Myrmecodia tuberosa 'papuana'.    This plant can be traced back to seeds collected from plants in the McIlwraith Range in Queensland, Australia.  The caudex has seriously stout spines up to 1.5 cm long. These are photos of a mature plant grown from a seed planted in 2007. It is growing in an 8 inch basket mounted on its side so that the plant will be in a more natural position like it would hang on the side of a tree in habitat. 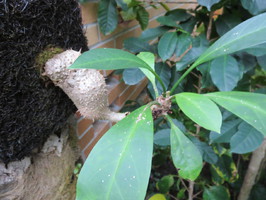 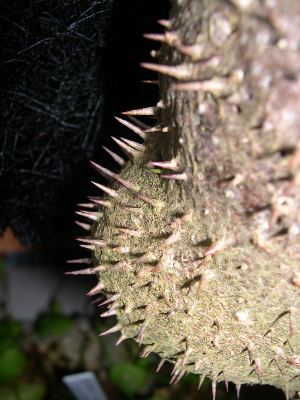 Myrmecodia species with pink fruit.  This plant is being grown by advanced collectors worldwide under this name but no one seems to know where it came from.   Its popularity has to do with it being the most spiny Rubiaceous ant-plant in widespread cultivation.  (There are many species with more spines, but they don’t show up often in cultivation and have proven slow to propagate).

The flowers of this plant are rather unique in their shape and the pink to scarlet fruits are also unusual.  Most Myrmecodias have orange fruits.  A case can be made that this may actually be a different clone of Myrmecodia tuberosa ‘papuana’ - probably from the New Guinea population of that species. 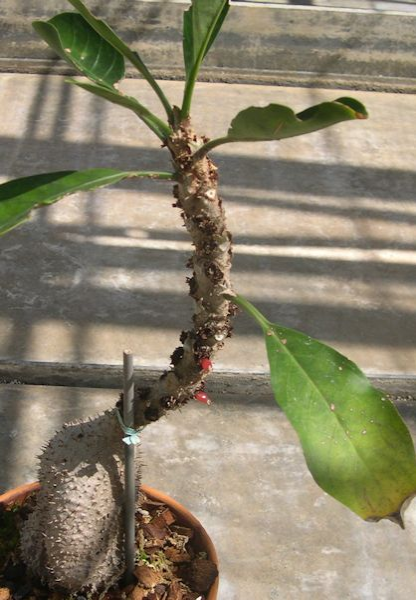 Myrmecodia tuberosa ‘dahlii’.  This variant of M tuberosa grows only on the islands of New Britain and New Ireland.  It is quite variable with some forms having spines up to 1.5 cm long.  In habitat some plants grow pendulously on long roots hanging from tree branches.

A 'dahlii' that I mounted pendulously from a cork tube by its rubbery roots.  In habitat they can hang down up to 18 cm. 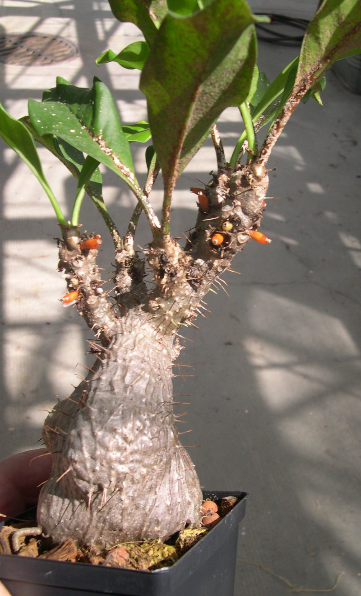 Note the long spines (1.4 cm) on this clone of M. tuberosa 'dahlii' 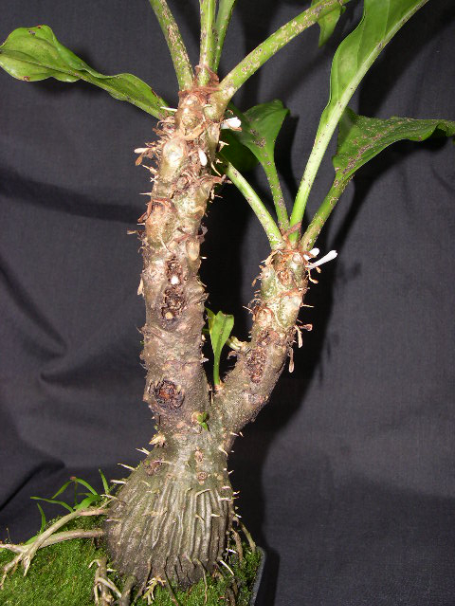 Some clones of 'dahlii' have caudexes that are green and are highly grooved. 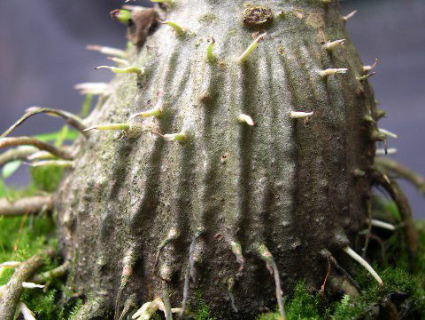 Close-up of caudex on plant to the left

Myrmecodia tuberosa from Borneo.  This plant has very thick stems as it gets older, over 1-1/4 inches in diameter.  It becomes an impressive specimen.  I can offer no further provenance on this species.  The plant shown here in a 7 inch pot is from a seed sown in 2002. 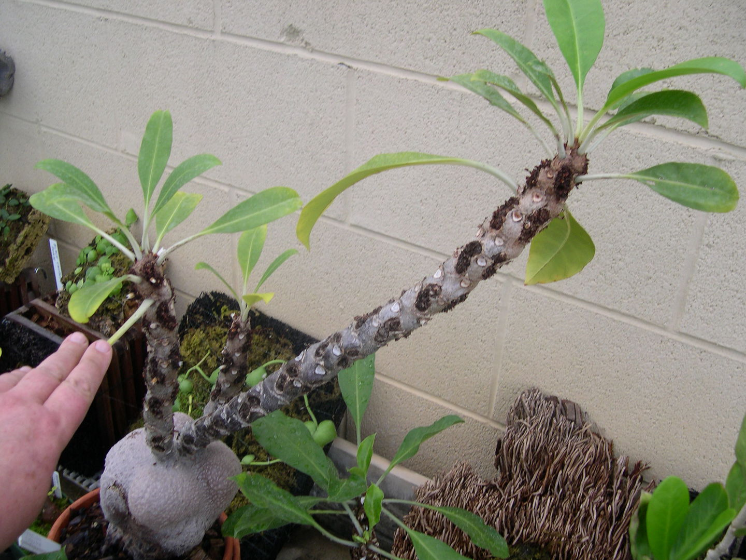 Myrmecodia species with winged clypeoli from the former Irian Jaya.  Irian Jaya was the country that occupied the west side of the island of New Guinea.  In the last decade it has been taken over by Indonesia and is now their two provinces, Papua and West Papua.

This is another species that stays on the small side.  I have never grown one to over one foot.  It is interesting for several reasons:  The base of the caudex often has a shape that suggests that the caudex has “saddlebags” and the clypeoli at the base of the petioles are “winged” with a narrow tan membrane.  Left photo is plant in a 3 inch pot, right is close-up of a clypeoli. 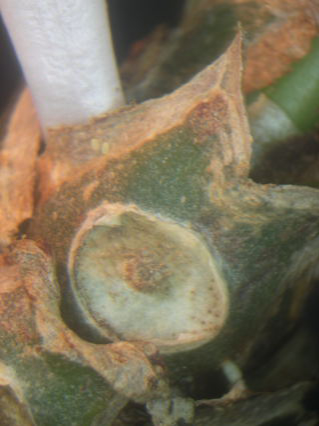 Myrmecodia platytyrea, Tropiflora Nursery #1552 and #2998.  The spelling of this species name is often different than what you see here.  The double “ty” is the correct spelling per the 1993 Revision of the genus Myrmecodia by Drs. Matthew Jebb and Camilla Huxley.

This material was collected by H. Graf of Caracas, Venezuela along the Sepik River in northern Papua New Guinea.  He provided it to Tropiflora Nursery in Florida and they began selling it in1997 under these two numbers.  Plants also found their way into Europe about the same time. In habitat the plants sometimes grow hanging straight down from the underside of tree branches.

M. platytyrea has large flowers (1.5 cm) and has distinctive clypeoli that are lined up like gently twisting kernels on a corn cob.  the flowers emerge from the gap between the clypeoli 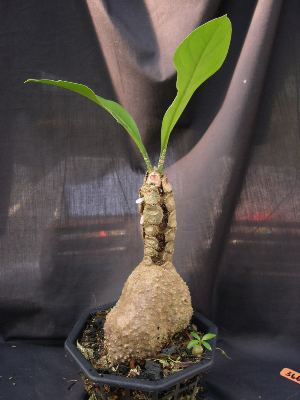 Younger plant in a 3 inch basket.

Myrmecodia platytyrea from Mossman Gorge, Queensland, AU.  Seeds under this name came out of Australia a number of years ago and the plants have attracted a serious amount of interest and discussion because they differ from the typical M. platytyrea in several very noticeable ways.  Specifically the leaves are fairly succulent (regular platytyrea leaves are not) and the arrangement of the clypeoli is significantly different (not a continuous line of gaps between them as in regular platytyrea). Are these just a strange form of M. platytyrea or a new undescribed species? A vigorous discussion about these plants can be found on the “Ant-plant Forum” at:  Myrmecodia.org

Photo is a 9 year old seed-grown plant with fruits in a 6 inch pot. 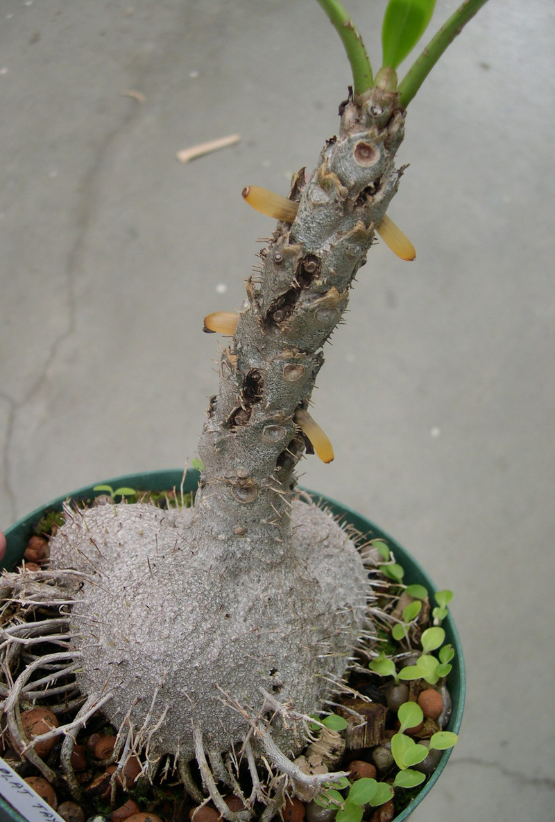